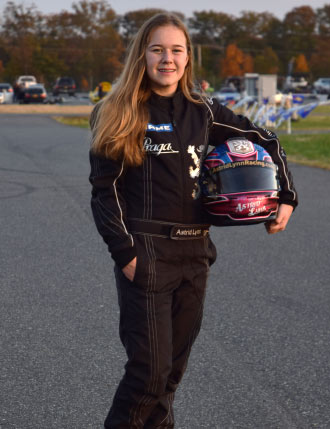 Astrid’s experience is very broad for such a young lady. Her parents, Scott and Michele, are heavily involved in motorsports both at the professional and amateur levels. This has broadened Astrid’s exposure to the motorsports community as she has always been involved. 2011/2012, Astrid began karting at the age of 8 years old through the Somerset County 4H Karting program. While she was too young to drive at the time, she became very active in the program. During the same time period Astrid began indoor karting where she was allowed to drive. She really began to break in her driving shoes racing competitively in the LVGP leagues where she rose to the top with multiple poles and wins. Astrid knew the path she wanted to take at this point. 2015, Astrid then began racing in the very competitive, outdoor Gear Up/F-Series karting series. This is where Astrid began to learn all the aspects of racing including the terminology and the engineering that’s required for racing. This is where she truly started to learn and develop her race craft. Astrid secured the IAME Contingency Championship and secured “Rookie of the Year” in 2016. Now at the age of 14 she has begun her transition into the world of racing GT cars.

The list goes on for Astrid. Having two parents heavily involved in racing has its advantages for a young aspiring race car driver. Additional notes, Astrid has worked for The Racers Group during the Rolex 24 hours of Daytona. She has co-run numerous High Performance Driver Education events. She has been involved with all kinds of racing whether it be NASCAR, ARCA, IMSA or the local amateur organizations.

In 2017, Astrid has been out on track in a BMW and 2018 holds an open door for this young aspiring driver to continue on her path in GT racing.

For more information or to follow Astrid’s developing racing career:

MARKET HOURS:
Re-opening on March 31st. See you then!