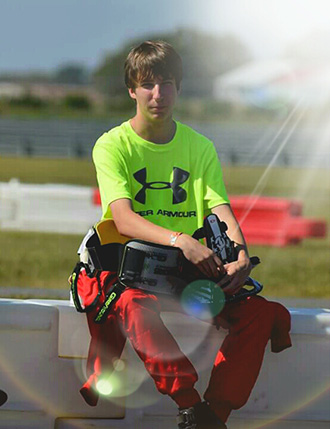 Dante is 16 years old, a sophomore at Freedom High School in Bethlehem Pa. He started racing indoor karts 3 1Ž2 years ago at Lehigh Valley Grand Prix. On November 5th, 2016, Dante was lucky enough to participate in an “arrive and drive” at Raceway Park in Englishtown, NJ. This was his first attempt at outdoor karting where he drove his brand new TonyKart. Dante came away with an 8th place finish out of 15 competing at his level. This was an outstanding accomplishment for his first time ever racing outdoor karts upwards of 65-70 mph with no seat belts! He was up against racers that have been racing for 4 plus years! Quite an accomplishment!

Since then Dante has continued on by joining and competing in a National karting series call the The State Championship Powered by the F-Series. This is a highly competitive nationwide series. He just completed his rookie year in 2017 and finished P5 out of over 23 racers in his level, TaG Junior.

“Racing to me is my life,” says Dante. “I’ve always enjoyed it from watching it on TV from age 2 to going to Nascar races to me racing go-karts indoors and winning 2 Championships. Now I’ve taken my karting to a new level and ultimately plan to compete professionally. Nothing beats the speed and the thrill of passing others on the track! To do this, I have a great opportunity to run in the outdoor F-Series NJ State Karting Series which runs from March to November in the state of NJ. I’ve moved up to the TaG Senior karting level with bigger and better challenges and competitors. Bring on the 2018 race season! My goal right now is to compete to the best of my ability… and to push myself even further. My ultimate goal is to win the series using a COMPKART with the number #73 on the side. Reaching hard for that goal for me and my family.”

To keep up with the latest news on Dante’s racing progress, you can follow his Facebook page, 73Gend Motorsports.

MARKET HOURS:
Re-opening on March 31st. See you then!